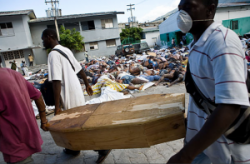 Those are bodies in the background 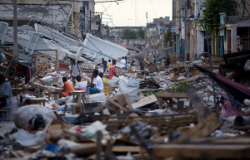 What Are We to Think About Earthquakes?


Psa 18:6-7   In my distress I called upon the LORD; to my God I cried for help. From his temple he heard my voice, and my cry to him reached his ears. Then the earth reeled and rocked; the foundations also of the mountains trembled and quaked, because he was angry.


On Tuesday January 12, 2010, the world witnessed the horrendous devastation and human tragedy of Port au Prince Haiti.  Not only was this the worst earthquake in the island’s recorded history, but it is one of the worst ever witnessed in the western hemisphere, as far as the damage, death toll, and lack of preparedness.  We all watched in horror as dazed little children were seen roaming through piles of dead bodies looking for their parents. We all saw bucket loaders picking up bodies and loading them into dump trucks for transport to the morgue where thousands upon thousands were piled in heaps.  Twenty feet away there were people laying on the ground, bruised, lacerated, bleeding, some with severed limbs, but still clinging to life.  We watched the dramatic rescue of an eleven year old girl, tenuously pulled from under a steel I-beam, only to die shortly after her rescue.  Her last pathetic words were “Mommy don’t let me die”.  It was horrendous and horrible human suffering on a scale, I don’t think I ever witnessed with my eyes, in my whole life.

Then I heard a high profile televangelist make some irresponsible and insensitive comments about Haiti having sold it’s soul to the devil.  He was quickly rebuked and rightly so.  But there has been a tremendous outpouring of Christian love and compassion, of prayers and support to assist these poor people in their time of greatest need. All over the world hearts and pocketbooks have opened up to help. No amount of aid, can ever bring back the tens of thousands who died in an instant of terror that the survivors will never forget the rest of their lives. No amount of money will ever be able to purchase a night without nightmares for the children who watched their loved ones, mothers, fathers, friends and townspeople die in front of their eyes. What they witnessed is worse than a battle zone where a few hundred die. They witnessed total destruction of their world. They had so little before the quake.  They were one of the poorest nations on earth, but in a few minutes they went to having nothing.  No food, no water, no sanitation, no shelter, no hospital, no medicine, not even band-aids for their cuts, no beds, many with no shoes, all with just the clothes on their backs.  Chaos ensued.  People wandered dazed, confused and aimless through the streets. Screams of the trapped and wounded could be heard everywhere.  Night fell within an hour.  Cry’s of agony filled the darkness. A tortuous night of hell on earth.  Prayers were heard in the streets.

What happened in Haiti? Wasn’t God watching?  Couldn’t He have stopped it?  What is the point of such devastation?   Why would God allow so many precious people to endure such mind boggling pain and torture?  Why would He kill thousands in one stroke? If God is a God of love, why didn’t He show it to the Haitians? If He is all powerful, why didn’t He use His power to stop it?  For Him, He could have prevented it with a blink of His omnipotent eyes.  But He did no such thing.  What’s going on here?  Is something wrong with God?  Has He  forgotten how to be merciful?   Is He a cruel and heartless tyrant?  Is He vengeful and hateful? Is God Himself some kind of devil?  He did not do what He was supposed to do.  Maybe we have been mistaken about Him?  Maybe he is not a God after all?  If there was a real God, He seemed to be evidently absent from Haiti on January 12, 2010?  Where was He?

We cannot help but ask questions like this.  It’s normal for us to do so.  After all this is a challenge to the Christian faith.   Some people look at this and become confirmed in atheism.  They say, “If God is like that, I don’t want anything to do with Him. I’ll never believe in a God who is so hateful”. I have been hearing lots of this kind of talk from unbelievers.  But then I have been hearing talk from Christians as well, trying to answer the rebuffs. Here’s what Jim Wallis of Sojourners said.   “But I want to say this: My God does not cause evil. God is not a vengeful and retributive being, waiting to strike us down; instead, God is in the very midst of this tragedy, suffering with those who are suffering. When evil strikes, it’s easy to ask, where is God? The answer is simple: God is suffering with those who are suffering.”  I think that quote is pretty typical of the Christian response I’m hearing.  “God is not a tyrant.  He is a God of love and compassion.”  One preacher I heard said that “this was caused by the Devil, and that God was going to get the victory in it and turn around the evil that Satan brought, and show His love and glory through it”.

I don’t understand why preachers would tell lies to people when disasters strike.  That’s what these responses are.  They are lies. God does not suffer, no matter what happens on earth.  He is above suffering, because He is God. Nothing surprises Him, upsets Him, disturbs Him or causes Him suffering.   To say stuff like this is not only bad Theology, it is telling people lies, when they desperately need to be told the truth.  Men are thinking about spiritual things at times like this.  Their curiosities are peaked.  They are seeking answers to the questions that everyone is asking.  So why on earth should we lie to people about the true nature of God?  That makes no sense, and in fact it brings great dishonor to God, on top of all the false notions and negative feelings that people are already thinking.

Jim Wallis is adamant when He says, “My God does not cause evil.”  That is the view of most people, but God says, “I form the light, and create darkness: I make peace, and create evil: I the LORD do all these things” (Isa. 45:7).  So who is telling the truth?  Mr. Wallis and the others who parrot his words, or God?  Why God of course.   God does not lie (Tit. 1:2).  And in times of disaster like this neither should we lie.  That does nothing for the people who here it, and it hurts the cause of God and truth.   Just because people want to believe their God causes no evil, does not mean that we should give them license to trash the attributes of God.   Of course God causes earthquakes and disasters when they come.  What purpose is accomplished by telling people that God is powerless in these events?   He is not powerless.  Nor is He sitting by helplessly watching.  As a matter of fact,  He is in complete control.  Every soul who is gathered by the death angel, is gathered at the behest of God, and God alone.  It is not the devil who causes earthquakes, or who calls people into eternity.  It is God.  Why lie about it?  What good comes from deceiving people about what God is doing?   Are we afraid of the truth in the Bible?  Why do we hide it at times like this?  To emphasize only one part of the truth (The Love of God), and to hide the part about God’s absolute control of all thing (The Sovereignty of God), is to deceive people through silence.   We would all like to tell people about God’s goodness and Love, but it doesn’t look like that is what He was displaying in Haiti.  God shows men His sterner side often.  Consider the Tsunami’s in Indonesia that killed hundreds of thousand.  I’m sorry, but that was not a display of the Love of God or of His Tender Mercies.  Nor did He sit by helplessly watching.  Don’t tell people stuff like that.  While God is Loving and Kind, He is also Angry and vengeful as He sees fit.  “Vengeance is mine saith the Lord” (Ps. 94:1-3; Nah. 1:2-3; Rom. 12:19; Heb. 10:30).  I know that it sounds cruel and heartless to teach that God caused the suffering and pain in Haiti,  but to lie about this is a worse cruelty.   God sends destruction and calamities for many reasons;  sometimes to awaken nations, and sometimes to call men to repent, and sometimes to get Christians to learn true compassion, caring and sharing, and sometimes to alter the course of history, and sometimes to cause the world to think about the judgment day, and sometimes to raise up hero’s, but always to glorify Himself.  Did you catch that last one…always to glorify Himself. “For of him, and through him, and to him, are all things: to whom be glory for ever. Amen (Rom. 11:36).

My heart is broken over the plight of all those poor helpless people in Haiti.  They don’t even know what hit them.  How terrible.  How frightening it must be.  Do extend your hands of love and compassion to them.  Pray for their tremendous needs, and give to their aid.  Send money.  That is the most immediate thing needed.  Don’t delay.  But please, I beg of you…please don’t lie to people about the mighty Jehovah God.  “He is the same yesterday, today and forever” (Heb.13:8). Pray for their souls, and for the souls of all who have watched this display of The Omnipotence of God. This is meant to turn people everywhere to God in true repentance (Acts 17:30). .