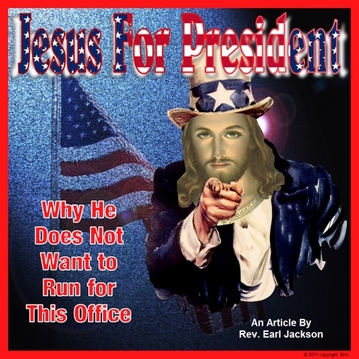 Why Jesus Christ would never
want to be President of the United States,
and why we should not want him to be our national leader!


John 6:15  "Perceiving then that they were about to come and take him by force to make him king, Jesus withdrew again to the mountain by himself."


It is not just the right-wing hyper-spiritual, Bible-thumping crowd, who wants to drag Jesus Christ into the political arena; but many on the left do it also, under the guise of his social ethics, justice, caring for the poor etc.  But the fact is, that the Bible plainly and irrevocably excludes Jesus from the political arena, and for good reason.  Not only does he not want to be president, but we would not want him to be president either.


The political arena; with all its scumbags, palm greasers, greed grabbers, self-interested, morally-corrupt, twisted-thinking, and perverse reprobates;  who run the Washington comedy show, a veritable cesspool of unrighteousness in both behavior and thinking; is no place for the spotless, lamb of God.  Christ is himself absolute purity and incorruptible moral virtue of the highest order.  How is it that we want to drag the sinless one once again into the boiling pot of iniquity, in-fighting and and the blackest woe? Did Christ not see enough of man's iniquity at Jerusalem?  Must He witness it on Capital Hill also?   Was it not enough that He came to this darkened and outcast world once?  Did He not stoop to leave heaven and come into the blackness of this sin pit once already?  Only to find that the politics of earth could not tolerate his absolute purity and moral turpitude.  Do we forget that the political crowd on earth, saw to his very execution on a cross?  Christ went to Calvary's hill, and not Capital Hill, for a reason!  He could have gone wherever He wanted.  But He chose the former rather than where we would try to drag Him today.  Why?

Now I know that he came here expressly to die for sinners,  but do the sinners in Washington really treat him any differently then those of ancient Rome, or Jerusalem?  When they toss out a few Bible verses to substantiate their agenda, is it with a pure desire to know or validate the truth of Christ?  Or is it only with the actual motive, to make themselves and their evil self-righteousness appear as an acceptable agenda for the nation?  When they quote the Supreme authority, or thump on His Book, or hang His Laws in their courts or senate buildings, are they not merely casting the illusion that they themselves are actually under his authority?   even while they do their hellish deeds and pursue their own greedy self-aggrandizing goals?   It's good PR to quote the big man upstairs, isn't it?  But who in Washington actually does what he says?  Are the politicians actual followers? Or are they painting the illusion that they really know Christ and really give a damn about what He says?  The whitewash is simply hogwash no matter how nice it sounds or how pretty it looks.

When was the last time you saw a politician; republican, democrat, or otherwise; actually do this?  “Then Jesus told his disciples, If anyone would come after me, let him deny himself and take up his cross and follow me” (Matthew 16: 24). Denying themselves?  That seems like an utterly strange and foreign concept, something that can never be applied to the Washingtonians!  Always giving themselves huge pay raises, while the poor, the elderly, the disabled and helpless, can't get a meager increase in social security for for 3 years in a row!  That sounds like real self-denial to me!   Do you think the political crowd; the stump grinders,  who are now hot on the campaign trail; do you think they are after “self-denial”?  Are you so naïve that you really think they are looking to take up the cross of suffering and shame in order to follow Christ?  Or are they really seeking after more fame, fortune, and a life of glitz and glamor, the high-life in the halls of our countries highest office?  Who goes to Washington, who is not rich and famous?  And who ever leaves Washington, without book deals,  well sealed pensions and endless personal prosperity?  Talk as they will about their “Jesus devotion”  and their commitment to his truth, they are nothing but scammers, doling out eyewash for the masses, while they themselves will have nothing to do with the actual teachings of Jesus Christ.  Mark it down.  Jesus made it clear as crystal.  Anyone who does not deny himself and take up his cross, is not one of his followers. Say what they want, they are certainly not denying themselves!  In fact it is all about their self.  They want their self to be central, powerful, rich and the center of everybody else as well!   That excludes them from the list of Christ's true followers.  Self-denial is not practiced or known in the political arena, and that's why it is not of Christ, because that's all He has ever done.

The cross of Christ does not fit into Washington.  The mall is not big enough, the capital dome is not high enough, and the chambers of congress are not sanctified enough to contain Christ.  He will not fit there, and make no mistake, He will not go there. But need I add... HE DOES NOT BELONG THERE!

The politicizing of the Bible, and the nationalizing of the Christian message has long roots and traditions that go back to the mentioning of “God” by our nations early pioneers and founders.  Of course they mentioned God.  The Puritans came to this wilderness land, actually believing that they were being led by God into the promised land.  Their hyper-spiritualizing of the Biblical text, enabled them to live out a feeling of prophetic fulfillment, which gave them great strength to endure terrible hardship and suffering, and enabling them to actually carve out a great country on the backbone of self-sacrifice, privation, the tenets of faith, and the practice of actual humble service to God and men. The principles of relative morality, which seemed to be held by almost everyone, back then were far different then the anachronistic system today.  Those nation carving days of  nationalistic faith, are long gone.  And now what you have is total non-uniformity of religion, complete discontinuity of morality, total disregard for the real words of the Bible.  So all this nonsense about this being a Christian nation, and all this substance-less quoting of the Bible to back up somebodies personal agenda, is just a total waste of time.  In fact, Bible-thumping in politics, is completely counterproductive, both to the politics, and to the religion of the Bible.

Washington has absolutely nothing to do with the cause of God and truth, and to pretend that it does is simply a sham.  Better to let the things of Caesar take care of the things of Caesar, and let Christ take care of his own things.  Is not this what Christ indicated when he said:  “Render to Caesar the things that are Caesar's, and to God the things that are God's” (Mark 12:17). Christ is supremely interested, not in the course of this worlds affairs; since according to the Bible, “they shall all be burned up” (2Pet.3:10); but instead He is interested in the course of His kingdom which “is not of this world” (John 18:36).

So, to put Christ in Washington, either by vote or by legislation, is to put Him where He does not want to be.  He has no interest in reforming, moderating, bettering, or directing our politics, because His interests concern things far more important... the kingdom over which He is the Absolute Monarch.  So the bottom line, is that He does not want to be in the Washington cesspool, and we who are His followers, do not want him there either!  Let Him stay in the realms of glory, which he deserves.  If we do not cast pearls before swine, neither should we cast our precious Lord to the dogs on Capital Hill.  The stench of Washington savors not the things that are of the Lord, and indeed they cannot smell of heaven, because they are too polluted and corrupt. Instead, let the children of God go to their churches and pray to their Lord in heaven.  Let them pray for what is just and righteous.  Let them pray for what is holy and moral.  Let them pray for the needs and leaders of this land.  But for God's sake, let them keep Washington out of their pulpits!And let them keep their pulpits out of Washington!  Because Christ wants nothing to do with that mess, and we only defile Him when we drag Him into it. For  God's sake, KEEP CHRIST OUT OF WASINGTON!


Rev. Earl Jackson is a Reformed Baptist minister.
He maintains an active online theological and apologetic ministry,
and is a writer and speaker all around the country.
www.RevEarlJackson.com
www.AmazingDoctrines.com
www.MissionariesToTheUSA.com